What’s the protocol to dispose of old TVs? You’ve got the questions and we’ve got the answers!

Getting Rid of that Old TV

Everybody has been there at some point. It still works perfectly, but you can’t plug in your Xbox or ChromeCast (at least not without using some weird adapter). You can’t read the numbers on any of the players’ jerseys during football season, and is the score 28-21 or 16-11?

Eventually, it’s time to get rid of that big old tv. You call up your local donation center, but you’re surprised to hear they won’t accept it. It still works! In fact, not even churches or shelters seem to have any interest in your old TV. Here’s the problem: everybody is switching over to flatscreen models (or has already done so). That means there are millions and millions of old TVs available, and anyone who wants one has probably already gotten it.

Perhaps your next thought is that you should just throw your TV in the trash. Even if it fits in your can, this is not only a bad idea – it’s actually illegal in many areas! 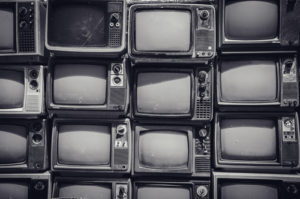 What’s the Problem with Throwing Away Old TVs?

Though it may seem like throwing an old TV in the trash is the best (or only) way to get rid of it, this couldn’t be farther from the truth. Old TVs contain a part called a “Cathode Ray Tube” (CRT). CRTs are constructed of a metal frame and leaded glass. This means that each CRT TV contains about 4 pounds of lead! Many TVs also contain hazardous materials like mercury and hexavalent chromium.

If these chemicals leach into the water supply (which has repeatedly happened at landfills across the country), they can result in birth defects, cancers, rare diseases, and even death in the surrounding areas. It’s estimated that 70% of the dangerous heavy metals found in landfills come from discarded electronics, making proper TV disposal a very important issue.

So What’s the Proper Way to Dispose of Old TVs?

Fortunately, when public television was switched over to digital signal in 2009, the federal government (and most state governments) put systems in place for handling the massive number of CRT TVs they knew people would be getting rid of. Most landfills have designated recycling areas for old TVs (along with many appliances, hazardous materials, and other recyclable goods). If you have a truck and a strong helper, this is a great option.

However, some of these old TVs weigh in excess of 200 or even 300 pounds! If you have one of these TVs, if you don’t have a truck, or if you don’t want to deal with the hassle of hauling your TV to the recycling center and waiting in line for an hour, Junk Guys can help! We offer full service TV removal and environmentally responsible disposal. We’ll get your TV from wherever it’s located on your property, haul it to an appropriate recycling facility, and make sure it’s safely unloaded.

Residents and businesses in the Sacramento area call Junk Guys to get rid of old TVs and other electronics!